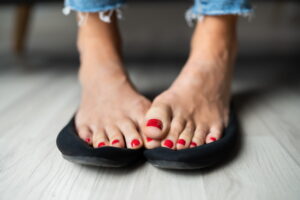 Shoe odors are not abnormal by any stretch. A lot of people cringe at the smell whenever they take off their shoes. But for one particular group of people, the problem is especially troublesome. These are people who suffer from a condition known as hyperhidrosis. They are a core group that depend heavily on a good shoe deodorizer spray.

Hyperhidrosis is a condition characterized by excessive perspiration. Sufferers do not just sweat; they sweat a lot. So much so that it can be a real problem for social interaction, daily work life, etc. But there are treatments. There are also ways to positively deal with the fallout of this condition. Again, a shoe deodorizer spray is just one of them.

In human beings, sweat glands are distributed throughout the skin as a means of helping to keep the body cool. There are two different types of sweat glands, the eccrine glands being the most abundant and the ones associated with hyperhidrosis. Here’s the deal: a person’s skin can have anywhere from 1.6 to 5 million sweat glands.

That is a lot of sweat glands. But there’s more. The density of the sweat glands in any given portion of the skin differs from one anatomical feature to the other. Guess what two features boast the largest volume? The soles of the feet and the palms of the hands.

To put this in simple English, you are more likely to sweat from your hands and feet than any other parts of your body. Hyperhidrosis sufferers know this all too well. Their hands and feet can be like faucets, which brings us back to the idea of a shoe deodorizer spray. Wherever there is sweat, there is the potential for bad odors. The feet are especially vulnerable because covering them in shoes reduces airflow significantly.

You might be interested to know that sweat is odorless in its natural state. So why do sweaty people smell? Why the need for shoe odor eliminators? The problem is bacteria. Introduce sweat and bacteria to the same space and it soon becomes apparent that they don’t play well together. You could also say they do not mix, but that technically wouldn’t be true.

The bacteria on your skin feed off some of the components naturally found in your perspiration. As they do so, they also proliferate. The combined process of feeding and multiplying is that which creates the unpleasant odors associated with perspiration.

With all of that understood, consider the fact that sweat easily evaporates from your arms when they are exposed to fresh air and sunshine. Air and sunlight both promote evaporation. But now think about your feet. When they are covered in socks and shoes, forget about sunlight and fresh air.

It Gets into the Shoes

It is bad enough that socks and shoes prevent perspiration from evaporating. Things are made worse by the fact that the perspiration and bacteria on your feet can work its way into your shoes. That’s why doctors encourage hyperhidrosis sufferers to wear socks and loosely fitting shoes. Absorbent socks reduce the amount of bacteria-saturated perspiration that finds its way to the shoe material.

As for a shoe deodorizer spray, its purpose is to eliminate odors by addressing the sweat and bacteria. For hyperhidrosis sufferers, a shoe spray that completely eliminates and prevents unwanted shoe odors is welcome. ShoeFresh shoe spray eliminates some of the embarrassment that comes with this uncomfortable condition. It makes it easier for hyperhidrosis sufferers to feel confident when they take off their shoes.